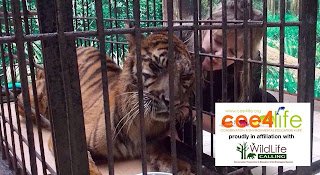 Surabaya, Indonesia’s second - largest city with a population of  over 3 million people has an atrocious Zoo where a giraffe was found dead with twenty plastic bags in her stomach, tigers were poisoned and monkey’s with TB run around untreated and unchecked, probably passing it on to others.

The zoo is nor tun by experts but by the mayor of Surabaya.

Cee4life’s Sybelle Foxcroft has all the news about the case and talks to us in-depth about it.

Read the press release mentioned in the interview HERE
Posted by TJ at 7:51 AM