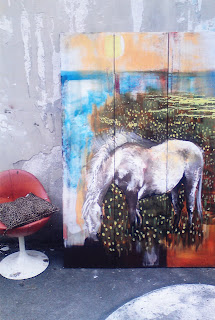 Artist Tom Byrne who has been on WILD TIME two years ago has a fascinating new painting and a project coming up and he will be talking to WILD TIME ONLINE about it very soon (Watch this space). This is what he has to say about the new painting:

" The screen title is"white main "after the 1952 french movie
about a young boy who befriends a wild camargue horse on the camargue plains
at the end the horse comits suicide and the boy follows him into the sea and drowns too it was a movie i saw as a boy that haunted me and never left my mind and now having spent 3 years studying the pyeball irish horse that reminds me of the camargue one i hope to travel to south of france and study the ultimate hardy gypsy horse on the plains of the camargue.

40 years after seeing the movie .This screen is painted from memory into an irish version of the film depicting a boy ,(perhaps me) under the shadow of the suger loaf mountain (symbol my father) and the horse on the other side grazing beside the sea (symbol my mother ) and of course the horse is my symbol of freedom and a metephor for myself ..."

Also to come is an interview with John Dalley from the Soi Dog Foundation in Thailand.

Online dates to be announced soon
Posted by TJ at 6:00 AM